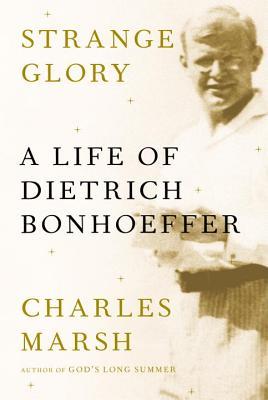 Dietrich Bonhoeffer continues to be a controversial character among evangelicals, and others, even into the 21st century. Some praise the 20th century German theologian for his contribution to “neo-orthodoxy” while others are harshly critical of both Bonhoeffer and friend Karl Barth, condemning both for their intrusion on traditionalism. Regardless what presuppositions you may have on Bonhoeffer (or Barth for that matter), “Strange Glory” was a deep, rich (and quite frankly, most enjoyable) read that solidified in my mind how we should view Bonhoeffer.

I must start off by saying that this book is not without controversy. Indeed, I originally found it on Al Mohler’s summer reading list, where I had recently read an article he wrote called, “Baptist Polity and the Integrity of the Southern Baptist Convention,” which was about the intrusion of homosexuality threatening to split the convention. As I was reading the comments for Marsh’s book on Amazon, I saw a comment condemning the book for the accusation that Bonhoeffer was gay. I have never been one to shy away from controversy, so I read the book anyway and would recommend (and have recommended) for other Christians to read it. So here is what I will say on the subject: do I think Bonhoeffer was gay? No (not only did he die a virgin, but he was engaged to a young woman for some years). And in fact, the Gospel Coalition wrote a fantastic article recently called, “Was Bonheoffer gay? And other adventures in missing the point!” I thought the most striking feature of this article was the obsession our culture has with not just sex but gender and sexual orientation. In our day-to-day lives we are saturated with themes that are sexual-centric and it becomes the pivotal point in determining what is important in the biographies of today (As a side-note, in the book I read earlier this year, “Washington” by Ron Chernow, he is convinced that George Washington was having affairs with various women). If this is the central point in the book (it’s not) to you or the only reason you won’t read it, then you are certainly missing out.

With that out of the way, Marsh is a beautiful writer. The imagery that he writes with made me feel like I was sitting with Bonhoeffer in the mountains as he read a book in the cool of the morning, or inside his childhood home having a most clear picture of what it would have looked like. Marsh explores several very interesting ideas regarding Bonhoeffer, particularly his theological convictions in the “revival” of the Lutheran church. Just like context is key when studying scripture, the same is true in looking at a man such as Bonhoeffer: we must look at neo-orthodoxy and view it through the lens of the early 20th century Lutheran Church to fully understand the perspective in which Bonhoeffer swore his allegiance to.

The Lord of the Rings, Return of the King, J.R.R. Tolkien