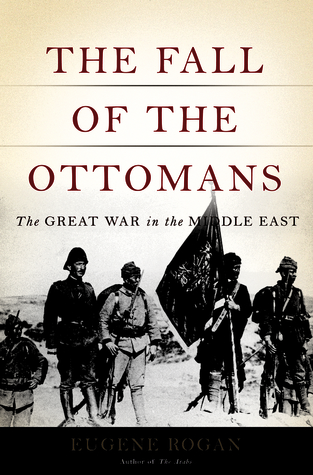 The author makes clear at the beginning of the book that the research for this book is often times hard to come by because many of the countries that formed out of the Ottoman Empire are closed to outsiders. Therefore, one cannot go into this book thinking that there will be a plethora of primary sources from the Ottoman side. In fact, much of the book is comprised of the British perspective of the Ottoman Empire in World War I.

The Ottomans went through two wars in the early 20th century called the Balkan Wars which drastically reduced their territory and weakened the Empire. Out of this came what became known as the “Young Turk Revolution,” which restored the Empire to a type of constitutional monarchy with parliament being reinstated. When World War I kicked off, the Ottomans were swayed by the Germans. Britain saw a greatly weakened power after Germany stalled on the Western Front and thought that the way to end the war faster would be to take out the Ottomans. Removing thousands of troops from the Western Front, they attempted several campaigns to topple the Ottoman Empire. One of these was called the “Battle of Gallipoli.” Britain thought that if they could take Istanbul, the Empire would crumble. The quickest route to Istanbul was through the Dardanelles. What they did not anticipate was that the Dardanelles were heavily fortified with underwater bombs and cannon emplacements. Britain failed to, 1) take the Gallipoli Peninsula, and 2) failed to get even remotely near to Istanbul.

Another campaign was called the “Siege of Kut.” About 100 miles south of Bagdad, Iraq was a town called Kut. The Britians were able to take this city but were quickly besieged by Ottoman forces. They stayed days there, anticipating additional forces while their food supplies dwindled. In the end, the British surrendered while living off of horse meat (throughout the campaigns in the Middle East, the British were re enforced by colonial Indian troops who refused to eat anything but vegetables because of their religious habits. They refused to eat horse meat until they were literally starving). The Ottomans made some of the lower enlisted men walk across the desert to Baghdad to add insult to injury.

The book also heavily focuses on T.E. Lawrence, or much more commonly known as “Lawrence of Arabia” by the movie of the same name. Lawrence, who was fluent in Arabic, was instrumental in forming the “Arab Revolt.” This concept was thought of to oppose the Ottoman call for Jihad. The autonomous Arabs thought that if Britain could win the Great War, they would give them independence from the Empire which was better than staying under Turkish rule. The Arab Revolt was instrumental in the fall of Baghdad and eventually, the toppling of the Empire.

What is interesting about the Fall of the Ottomans is what I have already mentioned, the religious aspects of the Great War. The Ottomans gained allies in the Middle East by adopting a Jihad against the Allied powers. They even were able to recruit Indian Muslims to their ranks as well as Arabs. The Ottomans were able to put a religious spin on the Great War and therefore went on a type of “crusade” against their enemies (much like the Christian Crusades of centuries earlier).

It seems that war on this magnitude gives nations such as the Ottomans (and the Germans in World War II) excuses to exterminate their enemies with the hopes that no one will notice. Like the extermination of millions of Jews in Hitler’s Germany, the Ottomans sent millions of Armenians on “death marches” in World War I. They were held responsible for their actions after the war (again, much like the high ranking Germans at the end of World War II) but only after millions had died.

One more thought needs to be considered: whenever you read books on World War I, it is of utmost important to remember that the type of weaponry they were dealing with is similar to what we use today, but in great infancy. Europe was just coming out of Napoleonic style war fighting where troops were used to not wearing the steel head protection they used later in the war or the artillery bombardments that characterized the Great War. Things like artillery, ships with massive firepower, tanks, even rifles and machine guns were, for the most part, new technology. With all this new technology, it took enormous trial and error processes to discover their weak points as well as their strengths. Unfortunately, the cost of human life was also incredibly substantial because of this. Late in the war, we begin to see how well the two sides were able to integrate artillery shelling and naval firepower to their benefit before putting troops into harm’s way (as an example).

Probably the most significant fact of the fall of the Ottomans was the dispersion of the Empire. What you may not realize is that for the most part, the borders and countries that are in place now were carved from negotiations from the First World War. When you add World War II into the mix with the return of Israel as a nation, you have a blueprint for internal conflict. Great book.