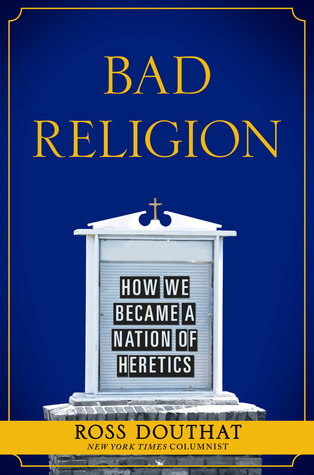 Going along with what seems to be my theme of the year, this is probably my 6th or 7th book on the state of Evangelicalism in America today. However, this is a little bit different because the last few books I’ve read on this subject have been by theologians. This book is by Ross Douthat who was a Harvard graduate and the youngest Op-Ed journalist in the New York Times history. He’s also a Protestant-turned-Catholic and provides an interesting perspective outside of Evangelicalism about Evangelicalism. I appreciate his candor and his writing of this book because it actually resonates what Dr. David Wells has been preaching about since his first book (which I reviewed earlier this year) “No Place for Truth” in 1994.

Douthat moves first to describing Christianity in the 1950’s. He cites four men who started movements in the 1950’s that would shape the Evangelical world in the 1960’s and beyond. These include: Richard Niebuhr in Neo-Orthodoxy, Billy Graham in Fundamentalism, Fulton Sheen in the Catholic Church, and Martin Luther King Jr. who represented the so-called “Black Church” which was a mixed of revivalism and Neo-Orthodoxy. During the 1960’s, the Evangelicalism came under fire with the various revolutions in that time. The response of Evangelicals was one of two ways: accommodationism and resistance. The accommodationists saw the revolutions in the 1960’s and responded to it by accommodating their theology to the culture. If they couldn’t win the culture war, they might as well join it. Religion, and Christianity in particular, was too exclusive; only a truly tolerant faith could survive modern man. Or so the accommodationist though. The inevitable result of such a position is no faith at all. Why cut up a resolutely established religious belief in both history and the culture when you could just become “spiritual” or agnostic? The resisters were just the opposite: instead of accommodating their theology, they tried to “convert” modernity. They did this in most importantly in politics but in other areas as well. Megachurches started to pop up everywhere. Evangelicalism started to abhor things like theology and, while holding to orthodox Christian beliefs, tried to appeal to the culture in way that would bring it into the doors of the church without forcing it to believe in anything in particular.Douthat says, “Evangelicalism became dominated by empire-building megachurch pastors whose ministries often burned brightly and then just as quickly burned out” (Douthat, 140). He ends the chapter by saying, “So the warning of Christian orthodoxy has led to the spread of Christian heresy rather than to the disappearance of religion altogether” (Douthat, 145).

In part II, Douthat looks at the various heresies that American Evangelicals has embraced: the “create-your-own-Jesus” movement (the paradox: the Gospel accounts/Jesus); the theology of prosperity (you have what it takes to conquer the world, or the paradox of evil); the “god within” movement (the tension between the reconciliation of God’s immanence with His transcendence); and the city on the hill (Evangelicalism’s worship of politics). I thought the most interesting was the chapter on the “god within.” One of the most memorable paragraphs was this one:

Between 1982 and 2006, sixteen thousand American college students filled out the Narcissistic Personality Inventory, a psychological evaluation that asks for responses to statements like “If I ruled the world, it would be a better place,” “I think I am a special person,” and “I can live my life any way I want to.” The trend was consistent: the average student in 2006 had a higher narcissism score than 65 percent of college students a generation earlier… In the 1950’s, only 12 percent of teenagers identified with the statement, “I am an important person.” A half century later, it was 80 percent (Douthat, 234-245).

An indictment on our generation, no doubt.

This was a really interesting book. I really enjoyed reading it and seeing a different perspective on things I had already read. I probably disagree with some things (particularly Douthat’s solutions or where Evangelicalism should go), but nothing too major.