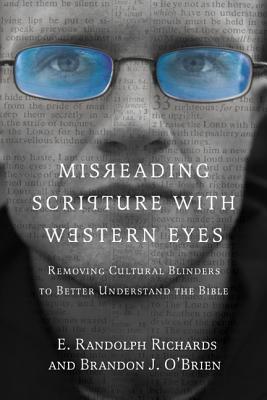 One of the most helpful classes I have ever taken was in hermeneutics. What I see, essentially every day, is people looking at scripture and taking it away something that isn’t biblical. The art of interpreting scripture should be a priority for Christians, and when I saw this book, I couldn’t help but see what it was about and if it resonated with what I had learned it my hermeneutics class.

I remember reading something a while ago on how different cultures look at Jesus. In America, Jesus is a blond haired, blue eyed saint when depicted in popular culture. In Korea though, Jesus is small-eyed and petite. The conclusion, then, is that different cultures adapt Jesus to their particular culture. And whether we see it or not, we do this with the interpretation of scripture as well. Authors Randolph (Randy) Richards and Brandon O’Brien sought to find out what cultural oddities we inscribe onto our interpretation of the bible in order to understand better our bent. What they discovered could potentially be life-changing in the way you read scripture.

The book begins with a chapter entitled “Coming to Terms with Our Cultural Blinders” which essentially states that we all bring a cultural bias to scripture. In fact, every culture reads the Bible differently. What we have to come to “terms” with is that we have a bias at all. Part one is called “Above the Surface” and the authors deal with mores, race and ethnicity, and language. I thought the mores (pronounced “Moor-ayes”) chapter was really quite interesting. Several decades ago, you wouldn’t be caught dead playing cards in the South. In the same time period, drinking alcohol in California was social suicide for Christians. So throughout time, different behaviors are forbidden by Christian culture but they are not expressly forbidden in the Bible. Understanding this helps us look at passages in the Bible with greater clarity when trying to understand whether certain behaviors are acceptable or not for Christians.

Part two is called “Just Below the Surface”. The authors deal with individualism and collectivism, honor/shame, and time. I thought the most interesting chapter here was the individualist versus collectivist. Americans are individualistic by nature. We may be connected with a community but we do something wrong, we take responsibility for it because we feel guilty. In collectivist cultures, people are convicted of wrongs because the culture looks down upon them for their wrong-doings. Collectivist cultures can also explain why things like family conversions in the Bible were legitimate.

Part three is called “Deep Below the Surface” which was some of the most interesting chapters of the book. They deal with rules and relationships, virtue and vice, and finding the center of God’s will. Virtue and vice I thought was intriguing: our culture has certain vices that are deemed unacceptable that aren’t necessarily biblical, and virtues that are acceptable but not necessarily biblical. For example, we think saving money is a virtue that all Christians should employ because, after all, are you not being wise with the money God has given you? But there is absolutely no biblical precedent for this. On the other hand, we think that giving to the poor is enabling them to be dependent upon people for their well-being, and yet there is a wealth of biblical precedent for this. Another one that actually really bugs me is the idea that our bodies are a temple and we should eat healthy and exercise. This is a common virtue in our culture. However, when you get beneath the surface, this is contextually dishonest to interpret this passage this way. And it’s very Western as well. One of the most interesting passages of the book was when Randy was a missionary in Indonesia and was hosting other missionaries. On the menu for the evening was cooked rat! One girl, when told hours later, lost her lunch. But it just goes to show that if our Western idea of “healthy” is righteous behavior, what about all the other countries whose culture says it’s ok for them to eat rat? Are they in sin? Well, no.. It’s just a cultural phenomenon that we project onto the Bible in order for us to live our a cultural virtue.

As you can see, the Western mindset can be more hurtful than helpful in interpretation. But in the same way, this is a lesson for all cultures: there is no “one” culture that is better than another at interpreting the Bible. The point I take away from the book is we need to know how we misinterpret the Bible and how our bias affect our interpretation of it. And for that reason, I would recommend it if you are interested in getting to know your cultural bias when reading the Bible.