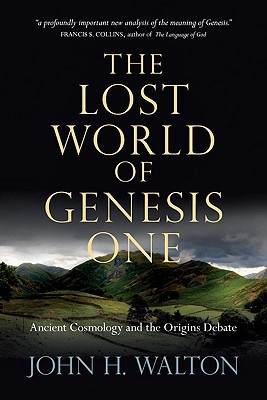 This is a shorter book but it’s packed with lots of material. John Walton’s work reminds me a lot of what Michael Hesier tries to do in the Unseen Realm: strip away your Western, preconceived notions about Genesis 1 in order to understand what the hearers of this material would have understood it as. And the conclusions he reaches are really interesting..

Ever since the Industrial Revolution, the rise of Darwinism, and Rationalism, both Christians and non-Christians have been obsessed with material origins, or, how the physical world came into being. So it is no wonder that when we look at Genesis 1 as Christians in our culture, we see this as God creating the material world. The problem is, that’s not how the ancient peoples would have seen Genesis 1! Dr. Walton discusses the idea of the Hebrew word “bara” which we would translate “to create from nothing.” We see this word in Genesis 1:1: “In the beginning God created the heavens and the earth” (emphasis mine). So we automatically assume that this means God created the material world out of nothing. However, the ancient peoples whom this was written to would have had a different interpretation of all the things that God created. Because creation to them did not mean bringing into existence that which was not there, but the creation of purpose to things. That’s why Genesis 1 seems so awkward at times. For example, in verse 3, God “creates” light. But it verse 5, he separates light from darkness. The key fact that we do not perceive is that God is not creating something out of nothing here, but rather God is purposing His creation for a specific function. In this instance, he is purposing light and day to establish time. Genesis 1 is God’s work in establishing function for His creation, not exactly the creation of it.

Dr. Walton makes an interesting corollary to this which will help in deciphering the difference between creating and function: imagine a college campus that has been made, that has classrooms set up, that has administrative offices, that has cafeterias and parks and the works. But no students. Everything is prepared for the students to come and make the campus a vibrant community that all college campuses are, but it is incomplete without the students. So this is true with Genesis 1: everything is setup to function in a particular way and the culminating day is when man and woman, the things in which the creation was specifically set up for, arrive and are called “very good.”

So you can see how this worldview would be dramatically different than the one in which we impose on scripture. Dr. Walton speaks at length about intelligent design and science. For science, they look at the world and try to understand why things are the way they are by observation and tests, hypothesis’ etc. Christians, ever since Darwin’s “Origin of Species”, have been at seemingly odds with science. Intelligent Design theorists (much like the Ken Ham’s of the world with his intelligent design museum) do so much to say that the bible contains within it all the answers that scientists have been looking for on the question of origins, and this is a well intentioned pursuit. They feel threatened by evolutionists and their attempts to discredit Christianity. But the problem comes when trying to examine the bible from a Western worldview that ceases to explain the purpose of Genesis 1: teleology, or the study of purpose. This is something I’ve been saying for quite some time now in fact: that the purpose of Genesis 1 is theological, not scientific. And despite attempts made by Intelligent Design theorists that ascribe a literal reading of Genesis 1, what they’ve failed to account for is the cultural background in which Genesis 1 was written.

All this to say is that Dr. Walton’s book does not advocate theistic evolution, but he certainly does not think it would be impossible. Some fundamentalists Christians will cringe at this, but he certainly does have a point. Trying to fit Genesis 1 into a box that blatantly says science is wrong isn’t exactly helpful for either side. And the debate to try to get intelligent design in schools makes scientists cringe because it’s not really about material origins. It’s about purpose and theology.

Dr. Walton has some suggestions as to what can be done to come to a compromise and I really like where he goes with this. Just notice that there isn’t enough space here to flesh out all the details of the book, and if you are truly interested in more, I would highly suggest reading it. He makes some pretty convincing arguments.