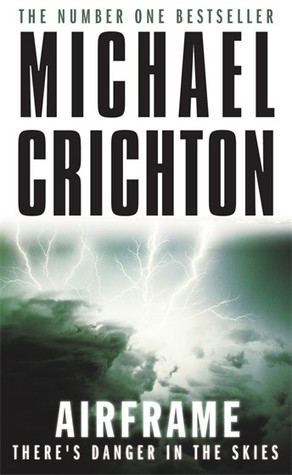 After reading Jurassic Park, I couldn’t help but devour more Michael Crichton. Airframe was available at my library so I picked it up. Jurassic Park, to me, was exciting because of the originality of the story. But it was also clever, well written, and well researched. What ensued in Airframe has the same type of marks with less success in the execution.

The premise of the book surrounds a mysterious accident aboard a passenger airliner from Hong Kong to Los Angeles. The parent company has to battle a nightmare PR scandal while trying to figure out how to prevent this from ever happening again. What follows is a mixture of intrigue, suspense, and fear as employees who are trying to get to the bottom of the case are threatened to quit investigating.

Crichton is a master researcher. If you thought he provided crazy details about genetics and the ability to clone dinosaurs in Jurassic Park, his research in the aeronautical industry is mind boggling (not to mention boring). I wasn’t as gripped with this book as some others. I read other reviews like “I couldn’t put this down after I started it” but that wasn’t the case with me. I thought the middle of the book really lagged and I had to push through.