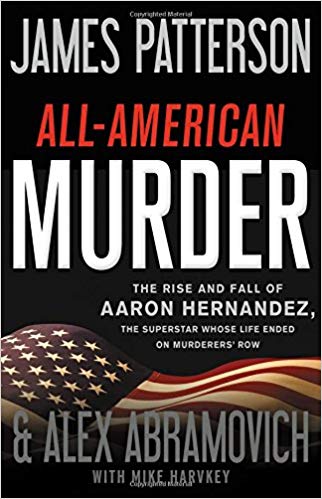 I am a big football fan, so I was aware and following most of the tragic story that followed Aaron Hernandez. For those not familiar, he was this huge man who was a brilliant tight end for the New England Patriots. He played in the second New England Patriot loss against the Giants in 2012, but many believed he was just beginning a Hall of Fame career. A bright start would end in tragedy after Hernandez was investigated in conjunction with a murder. As the case opened up, Hernandez would eventually be sentenced to life in prison without the possibility for parole.

But where did things go wrong? How could this kid, a small town Connecticut kid, end up murdering someone in cold blood? James Patterson tells the story of how Hernandez became as troubled child shortly after his father died. What came next would lead Hernandez to many dark places. As a Florida Gator, not even Tim Tebow could keep the young man in line. When he came to the NFL, Patterson tells how many teams were worried because of how troubled he was. After he signed on to New England, he was involved with drugs, women, everything you can imagine; this was not a role model football player trying to make the world better. This was a tyrant who was bound to get into trouble.

This book was captivating. I was hooked on the murder-mystery aspect but also shocked at how much Hernandez got away with. I remember watching him on TV, in awe of his length and power. That that person could be involved with so much evil must give you pause. Further, it sheds light on the celebrity culture in America, where people who are given a certain status in society are able to get away with, in some cases literally, murder and the justice system fails. This story is complex, but it was a good read.