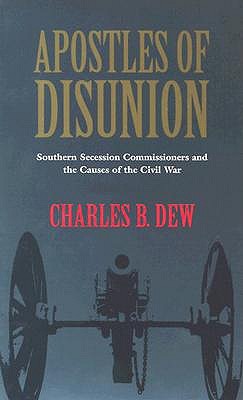 This rather short book is packed with a ton of information regarding the Southern reasons for secession. Dr. Dew recounts many of the same kinds of stories that we seemed to be faced with in the introduction. For example, on the citizenship test for becoming a United States Citizen, a question is asked “Why was the Civil War fought?” The answer could realistically be either because of “states rights” or over slavery. Dr. Dew seeks to understand the reasons for secession better in this book; he wants to give clarity that the Southern states did not secede over states rights, as Southern revisionist historians in the 19th century suggested and that became mainstream as Southerns attempted to assuage their guilt over the war, but over the nasty topic of slavery.

Dr. Dew demonstrates this quite skillfully in looking at a little studied piece of history in the Southern Commissioners. After Abraham Lincoln was elected President, South Carolina seceded soon after. They gathered up prominent statesmen to take their case to other Southern states to secede just as South Carolina did. The Southern Commissioners took the message of disunity to Alabama, Virginia, Maryland, Georgia, and other states. They talked most often in front of the states leading members including the governor and the legislature’s assembled body. Dew says, “From December 1860 to April 1861, they carried the gospel of disunion to the far corners of the South” (Dew, 18).

What ensues is a book full of the highlights of the commissioners reports. These are public documents of their speeches, and they are candid in their explanations. There were a number of reasons for Southerns to be alarmed at the abolition of slavery and these arguments are heard in the speeches. For one, they believed that freeing of the slaves might cause an uprising amongst them, killing the slave owners and their families. They also thought that the freeing of slaves would decimate their economic progress. But at the core of it, they would be considered just plain racist in our day. They believed that white supremacy would be quashed if slaves were free. So they took to preserving their way of life by separating from the very same people who threatened them.

I think the title of this book is so brilliant: the Apostles of Disunion. That’s essentially what the commissioners were. Dr. Dew says, “And by helping us to understand the ‘why’ of secession, these apostles of disunion have gone a long way toward answering that all-important question, ‘The Civil War was fought over what important issue?’” (Dew, 21). And Dr. Dew makes a convincing argument: if indeed these commissioners were making the abolition of slavery an apologetic to get other Southern states on board with secession, then it would put the argument that the states seceded on the issue of state’s rights on precarious ground.

But alas, I believe we will continue to fight against this notion because in our time, it’s just not an issue that we would like to rehash. We are comfortable with the idea of state’s rights which is put in a much better light than white supremacy. Uncovering these documents and looking into what these men actually said is almost frightening and goes a long ways in explaining the fall out of the complete abolition of slavery and the systematic racism that ensued in the South for decades to come. We are still feeling the reverberations of such arguments today in one way or another. So this is an important book and an important topic that we will continue to explore.