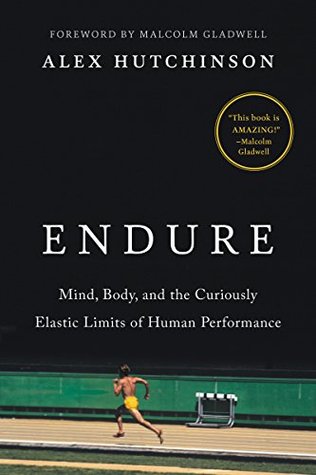 I am interested in long distance running; I am not necessarily all that motivated to do it, however. In college, I cut way back on calories and started running daily. By the end of the semester, I had lost more than 25 lbs and was in some of the best shape of my life. It was then that I made it a life goal to run a marathon. I still have yet to do that, but earlier this year I decided to start training instead of just saying I was going to eventually run a marathon.

This book, then, is absolutely piqued my interest. Alex Hutchinson asks questions I have been quietly wondering in the back of my head since that Freshman year of college: what are the limitations humans have when it comes to exercise? Or in a different way, why do I stop running? It’s not because I absolutely cannot go on; and it is not because I haven’t trained hard enough (in some circumstances at least).

Hutchinson answers these questions with data and science. In part I (entitled, “Mind and Muscle), he looks the reason why we have limits: because of our brain. If we had nothing to prevent us from reaching beyond our limits, we most certainly would be brought to the edge of death every time we hit the pavement or the gym. The mind is a powerful tool to prevent us from injury and to keep us from reaching the point of no return. However, there are ways in which the brain hinders us and pushing past those mental barriers is critical to performing at the highest level possible. The research in this section is fascinating and answers many questions that I had.

In part II, Hutchinson looks at the limits we have in six different areas: pain, muscle, oxygen, heat, thirst, fuel. Each chapter is dedicated to the science behind how people have managed to break free from convention in these categories to reach another level. For example, I thought the heat and thirst chapters had a common theme. Usually we think that we need to drink a lot of water before and during exercise so we keep cool and hydrated. But in reality, a marathon runner loses about 10% of his/her bodyweight in the course of the marathon; not a significant loss of fluids to cause any damage. In the same vein, heat stroke is rare but it’s not because we work kids in the heat too long; rather, as Hutchinson explains, the risk factors for heat stroke increase exponentially with certain medications. The similarities between the two are obvious: sometimes we defy what is considered “normal” to stretch beyond our limits, a theme that binds this entire part together.

Part III ends with how we overcome our own limitations. While I thought parts I and II were informative and interesting, I thought part III disappointed with some of the solutions Hutchinson provides.

Overall, this was an enlightening and interesting book. A must read for those who wish to push mind over matter on the track, the pavement, or the gym.