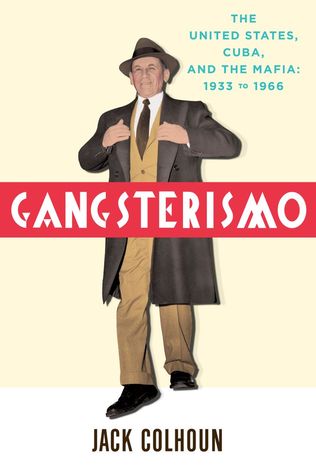 What do gambling, drugs, the mafia, and the Cuban Missile Crisis have to do with each other? Well apparently a lot. Jack Colhoun has compiled a general history of the estranged island of Cuba from 1933 to 1966 in this really compelling book that gives some clarity to the events that led to the week where the United States almost went to nuclear war with the Soviets. The narrative that Colhoun strings together is both intriguing and interesting.

Colhoun starts his book with a brief history on how we got to where the book begins by tracing some of the highlights of the small island nation. During the Spanish-American War, Cuba was proclaimed a territory of the United States and gained formal independence from the US in 1902. But not without strings attached: the independence gave the US the now infamous Guantanamo Bay which became a naval station and the right to intervene in Cuban affairs. After periods of unease, Gerardo Machado was elected President of Cuba, and to give the Cuban economy a boost, he engaged in pumping thousands of dollars into nightclubs, hotels, and casinos for rich Americans visiting Havana in the 1920s. In the 1930s, the official beginning of the history as notated in the book, the idea of Gangsterismo became prominent. American tourists would fly to Havana to spend the weekend gambling at the Las Vegas of the 30s. During this period, Cuba experienced a revolt by Fulgencio Batista who set up a new government. After power struggles throughout the 1940s and 50s led to Batista’s demise, he actually came to power again in the late 50s. But another faction was gaining traction in Cuba.

Fidel Castro staged a coup that ran Batista out of office. Castro set up the Communist regime to the chagrin of the United States, who was in full Cold-War mode. The CIA and both Presidents Eisenhower and Kennedy believed that something had to be done about Castro. Cue the Cuban Mafia. In the 30s, the Cuban Mafia had strong connections in Miami, Florida. Some of the more wealthy Cubans actually owned clubs in Miami and trafficked drugs and other paraphernalia (including prostitution) to there from Cuba. When Castro staged his coup, some Cubans fled the country while others stationed in Miami had strong feelings against the dictator. The CIA partnered with a group of outcasts to stage what became known as the Bay of Pigs Invasion. Due to Kennedy’s skittishness that the United States hand in Cuban affairs would arouse the suspicion of the Soviets (who were then fighting over East Germany with the Allied powers), the invasion was a massive failure.

The story becomes even more complicated when recognizing Kennedy’s Cold War ambitions. The Soviets became nuclear in Post-World War II. This is one of the hallmarks of the Cold War: both the US and the Soviets had incredible weapons pointed at each other, knowing that pulling the trigger could mean throwing humanity back to the stone age. Kennedy’s plan was to produce and stockpile nuclear weapons to prevent the Soviets from doing anything rash. The US also set up missile systems in Turkey, which, admittedly, made the Soviets a little nervous. In order to gain the upper hand, the Soviets partnered with the newly Communist regime in Cuba to send nuclear weapons on the island to prevent the US from doing anything they would regret. This caused a massive outrage in the United States. With Kennedy’s leadership however, cool heads prevailed.

I thought this was a really interesting look at the Cold War crisis. Not being alive during this time, I can recall telling my dad about this funny video (at least I think it was funny) I had seen, “Duck and Cover“. He, somewhat gravely, told me that the US almost went to war that week. It also demonstrates what an utter catastrophe the government can be sometimes. Kennedy botched the Bay of Pigs Invasion pretty bad; one of the big problems was his fear of the invasion being traced back to the Americans. However, had they been successful in routing Castro, we might not have been in the situation that we were during the missile crisis. But then again, what do I know about being President?

I only wish there was more information in this book on the Cuban Mafia. The only time Gangsterismo really plays out in the book is in the first couple of chapters. While the information on the missile crisis and the Bay of Pigs Invasion is of interest, I wanted to know more about nightlife in Havana during the peak of Gangsterismo.