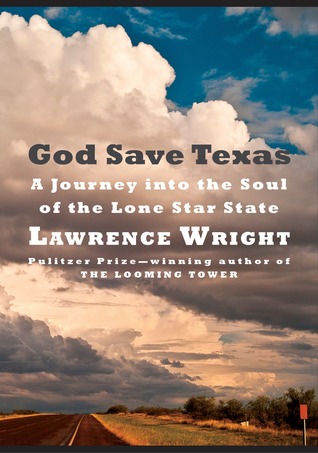 Lawrence Wright is a giant in the world of journalism. Author of Pulitzer Prize winning book “The Looming Tower” about the terrorist attack on the two towers in New York City on 9/11, Wright has distinguished himself as a scholar, historian, journalist, and, perhaps most famously, a texan.

That’s why this particular book must be considered one of his most personal. The curiosity of Texas to those who haven’t been is summarized in its apparent contradictions: both deeply conservative but also home to some of the largest cities in the United States (Austin, Dallas, and Houston) that paint the red landscape with (rather large) dots of blue; culturally relevant in its aspirations but also indefensibly lackluster in how progressive it will become (for example, Texas has some of the most restrictive laws on abortion in the US, but Houston’s mayor came close to collecting and destroying Pastor’s sermon material against homosexuality); the folks in Texas are some of the nicest people you can encounter but do NOT mess with them in vehicles (speaking from experience.. they are crazy drivers).

These inconsistencies drew Wright, and a large amount of the population, to the grand state of Texas. In this book, Wright recounts some of these curiosities while also getting to the point: defining and getting to the center of the “soul” of the Lone Star State.

Some of the information is very interesting, for both Texans and non-Texans alike. For example, Wright uses a bike ride he and his good friend took to the various missions and museums around Texas as a basis for where the next talking points of the book should be. He talks about how Texas is attracting businesses and families looking to relocate for a cheaper place to live than the extreme coasts of the US. The combination of low taxes, ports on its Southern side, and the plethora of industry makes Texas an ideal location for big business. That’s why its beating California for the top destination for both business and individual relocation.

These are the mundane, non-partisan facts that both interest and engage the reader. For these, I am appreciative. However, Wright assumes that there is something fundamentally wrong with his state. He spends an enormous amount of time trying to convince the reader that his perspective is actually the correct one, and that thousands of voters who come to the polls to elect “scary” representatives, senators, and governors with whom he disagrees with (Ted Cruz, George W. Bush for example) are part of the problem with his state.

That’s the biggest problem I had with this book. I enjoyed reading the facts and statistics about Texas. Texas is a state that I fell in love with; what Wright assumes is that those who disagree with him are largely the problem with the state and that it would be better without them. He doesn’t explicitly say that, but that’s the inference that I walked away with.

For this reason, I’d rate this book 3/5. Not essential reading on the subject of Texas, but well written and engaging even if I disagree with his worldview.