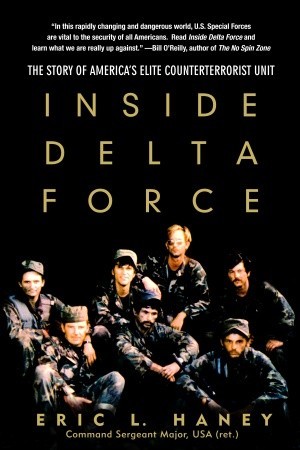 Delta Force, if you didn’t know, is a highly secretive, special operations unit attached to the United States Army. They are one of the premier counter-terrorist organizations (Raiders and SEALs not-withstanding) and have a reputation of being quite, efficient killers.

Eric Haney happened to be part of the first group of Soldiers who were able to try out for Delta. What ensued was a blur. The first part of this book talks about Haney’s experience of “trying out” and making it into Delta. He speaks at length about the training process (being vague enough to not give anything away but detailed enough to have a compelling story) and how they weeded out those who couldn’t make the cut. This is probably the most intriguing part of the book. After he is accepted into the program, the details regarding his follow on training are equally interesting. For example, during one part of the book, he enters a “shoot house” where each member of the team was to sit on a couch while the others entered and had to shoot the “bad guys” and not the friendly in the center of the room. That was after days and days of training. This kind of training says much about these men and their strengths; they really are well equipped to defeat terrorist threats both abroad and domestic.

The other information this memoir contains seems to be about the same as others of this genre that I have read (such as “No Easy Day”). Therefore, the book becomes much more uninteresting after Haney’s training phase. Not a terrible military memoir, but not my favorite either. 3/5.