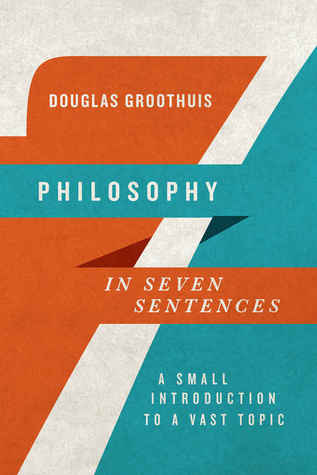 Dr. Douglas Groothuis wrote this book as an introduction to philosophy, as the title suggests. He does this by examining, in detail, seven sentences that changed the way people think. The seven sentences are:

(Protagoras) Man is the measure of all things
(Socrates) The unexamined life is not worth living
(Aristotle) All men by nature desire to know
(Augustine) You have made us for yourself, and restless is our heart until it comes to rest in you.
(Descartes) I think, therefore I am.
(Pascal) The heart has its reasons of which reason knows nothing
(Kierkegaard) The greatest hazard of all, losing one’s self, can occur very quietly in the world, as if it were nothing at all.
I was drawn to a couple points in particular. In chapter 2, (“The unexamined life is not worth living”), Dr. Groothuis looks at the idea of acedia. This is a latin term that means, “the unwillingness to pursue worthy goals” and in particular, intellectual goals. The inability of us to think deeply about things is not because we are not capable of doing so; on the contrary, all peoples are able to learn and perfect their craft. But we simply do not because, as Dr. Groothuis points out, we are simply lazy. This has struck a chord with me as of late because not only are we in an election year, but we are in a technologically connected society where we can see what other people think and believe. It’s stunning to see some of what is posted in my facebook feed of people not doing research or just believing anything they read/see. It’s not that we can’t look into whatever we believe, it’s just that we we refuse to. We exercise acedia to the extreme. What this sentence explains, then, is that we possess the capacity to think and reason (as Descartes knew) and yet we choose not to.

Sentence 3 (“All men by nature desire to know) perhaps builds on this. What Dr. Groothuis pulls out of this sentence is the law of noncontradiction. This, in simple terms, states that A cannot both be A and non-A at the same time. If it were, that would be a contradiction. As an example, you can state without falsity that the banana you’re holding is indeed a banana. But it cannot both be a banana and an iphone at the same time (maybe you can imagine the objects closest to me at this point).

Sentence 4 (You have made us for yourself and restless is our heart until it comes to rest in you) is one of my most favorites because Augustine is simply brilliant. Dr. Groothuis tells a story from Augustine’s “Confessions” that I found fascinating: apparently, Augustine had stolen some pears from a tree and fed them to pigs. In reminiscing on this fact, he says,

Thus the soul commits fornication when she is turned from you, and seeks apart from you, what she cannot find pure and untainted until she returns to you. All things thus imitate you— but pervertedly— when they separate themselves far from you and raise themselves up against you. But, even in this act of perverse imitation, they acknowledge you to be the Creator of all nature, and recognize that there is no place whither they can altogether separate themselves from you. What was it, then, that I loved in that theft? And wherein was I imitating my lord, even in a corrupted and perverted way? Did I wish, if only by gesture, to rebel against your law, even though I had no power to do so actually— so that, even as a captive, I might produce a sort of counterfeit liberty, by doing with impunity deeds that were forbidden, in a deluded sense of omnipotence? See this servant of yours, fleeing from his Lord and following a shadow! What rottenness! What monstrousness of life and abyss of death! Could I find pleasure only in what was unlawful, and only because it was unlawful?

This seems a little over the top does it not? But that’s the point: even the smallest of sins creates a gap between holy God and unholy man and the struggle that only finds “rest” when it comes to rest in God.

Sentence 5 (I think, therefore I am) speaks of an age old question: how do you know you exist? Many might balk at this question (you’d be exercising acedia perhaps if you did) but Descartes wanted to know truth about reality. He was skeptical, as we all are at times, and made the “bedrock” of reality in the fact that he was a thinker. Thoughts require a thinker after all! This perhaps flies in the face of empiricism. Empiricism is the idea that everything that is real must be seen, touched, examined, tested etc. for it to be true. But there is a problem with empiricism and the thinker, is there not? Thoughts cannot be seen, they cannot be tested or touched. So empiricism is not a worthy judge on reality. Dr. Groothuis moves onto where God fits into this system. The idea of God is massive and I love the knock on the old adage, “God is like fairy tales, unicorns, and the tooth fairy”; he explains that these things are not in the same category as God, merely invisible things without material existence. No, God is infinite, outside of time and space, immutable, along with a host of other big words that describe Him. What inside of us is unlimited, that is, infinite? No earthly thing, surely, could have manifested this idea, because earthly things are limited in time and space. Our minds need an explanation, and this could only have come: from within our nature, from without, or from our own devising. Since God cannot be explained from without or our own devising, God must exist. To put it another way, since Descartes is a thinking thing, and he possess the idea of an infinite God, God must be the originator of the idea.

Sentence 6 deals with the idea of knowledge and how we gain it. Reason is important, as it is a foundation on which we build many things; but it is not ultimate. I love this sentence from Dr. Groothuis: “Reason needs to be humbled, not destroyed, Reason is one way of knowing. It tests truth claims, but it cannot provide or disclose all truth; neither empirical observation nor theorizing can do so.” Some knowledge comes from the heart: love, as an example, is not scientific or empirical. To quote Dr. Groothuis again, “Reason, [Pascal] claims, is necessary in helping to convince the reluctant unbeliever of Christianity, but it is insufficient in itself to instill in anyone a religious change of life, which is a gift of God and a matter of the heart.”

The most complex chapter, as Mark agrees, is sentence 7: “The greatest hazard of all, losing one’s self, can occur very quietly in the world, as if it were nothing at all.” There are some good insights in here as well, but I think this review is long enough.

I love the conclusion: Dr. Groothuis quotes GK Chesterton when he said, “Even a bad shot is dignified when he accepts a duel.” I feel this way about philosophy in general. I’m still learning but it’s very interesting and I’d encourage you to pick up this book. Dr. Groothuis explains that philosophy needs to be thought upon: read a sentence and if you don’t understand, read it again and again; meditate on some of it to understand what it means. Don’t be the person who spurns intellectual things as so many I know. This is a great introduction for the layperson and if I gleaned excellent things out of it, I’m sure you will too.

As a side note, I believe Dr. Groothuis is a fan of jazz. I very much appreciated his musical analogies and his disgust with Kenny G; a saxophonist who I, too, have much displeasure for.