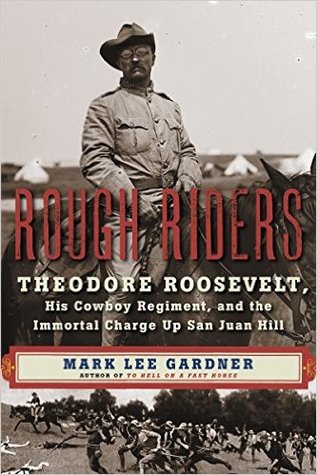 In 1898, the USS Maine exploded in the harbor of Havana. Americans were quick to blame the Spanish and what followed would become the Spanish-American War. President McKinley, with permission from Congress, enacted an order to recruit a volunteer outfit to help drive the Spanish from Cuba. What would ensue would be the brainchild of then Secretary of the Navy Theodore Roosevelt and Colonel Leonard Wood: the Roughriders.

The order specified only 1,250 men could participate in the force from 4 states: New Mexico, Arizona, Oklahoma and Texas. But with Roosevelt’s legacy at that time, everyone wanted to be a part of his outfit. Thousands applied to be roughriders and Roosevelt made exceptions for those not from the four states mentioned. For example, millionaire businessmen from New York City and college dropouts from Harvard and Yale were accepted and joined the force. Teddy had to turn down many who wanted to be a part of the force but were cut because of lack of space. They were chosen and assembled in San Antonio. Their training included basic infantry training and mounted combat. As a volunteer force, you wouldn’t necessarily think that these men would be the most disciplined, but quite the opposite was true. They drilled hard and retained order and acted as a cohesive unit.

They were shipped out to Tampa, Florida to await their final destination: Cuba. Complications ensued where only a fraction of the unit was to be shipped out to Cuba. When they finally got there, conditions were poor. Men battled disease, lack of food and shelter among other inconveniences.

One recurring issue Gardner points out in the tenure of the Rough Riders was the poor logistics battle they faced. Even from their training, they found weapons, food, tents, and other essential supplies difficult to come by. Since the unit was poorly financed by the government, Teddy often spent his own money to make the men feel more at home. Gardner gives an example of this when, during training in San Antonio, Teddy and the men happened to come upon a beer garden where Teddy ensued to pay for a beer or two for all the men. At the end of the campaign when food was particularly scarce, Teddy went to Santiago and paid, with his own funds, for an enormous amount of food which was transported to the troops. Lastly, after the troops were returned home, they were quarantined for four days; unfortunately, they were given the same moldy food they had been eating on the ship for weeks. Teddy put in a rush order of fresh fruit, vegetables, meats, cigars, and other provisions from New York City which he footed the bill himself.

The first fighting the Rough Riders experienced in Cuba was the Battle of Las Guasimas. Only lasting about an hour and a half, the Rough Riders took the outpost at Santiago with 8 dead and around 30 wounded. The next event would make history:

After taking the outpost, the troopers came upon an extremely well entrenched Spanish position at San Juan Hill. After being stymied by the intense fire and confusion with the regular troops, Roosevelt believed the only solution was a full on charge up the hill. Roosevelt was on his trusted steed, Little Texas and ordered a charge. When he turned around to see the men following him, there were only about 6 troopers with him. Realizing that the sounds of war made it difficult to hear, he ordered the men to sat put while he went to fetch the rest of the men. What followed was the infamous charge up San Juan Hill that has forever become an integral part of the lore of American history.

This book is a really interesting look at the history behind the Rough Riders and the legacy they left behind. It is also an incredible guide to what being an officer should look like. Roosevelt understood servant leadership and really put his men before himself. Who can imagine these days an officer footing the bill to feed thousands of troops? Because the force was a volunteer regiment, conventions that might have been looked down upon in the active military were able to get by in the volunteer force. And this isn’t to take away from the Army Soldiers and the Buffalo Soldiers who fought during these engagements. Roosevelt would attribute the success of the Rough Riders to these brave men.

Of course, Roosevelt would go on to become President of the United States. This chapter in his life would be incredibly impactful to his policies and thoughts on national security. Furthermore, he never forgot about his troopers. He would visit with veterans of the Rough Riders throughout his presidency as well as appointing some of them to public office.

Mark Lee Gardner has done a wonderful job at connecting the intricacies of this story into a coherent and delightful read. It was never dry and is perfectly suited for the audiobook format.