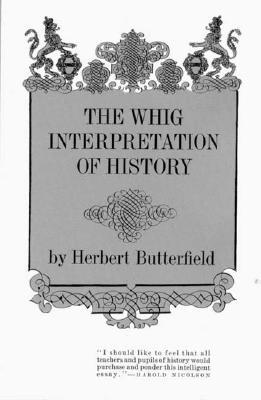 There are few books that I have read that have made huge impact on me, but I think Dr. Herbert Butterfield’s, “The Whig Interpretation of History” will be one of them.

Don’t let the name fool you: the “Whig Interpretation” could be called the “progressive view” as well, which is probably more familiar to us today. Written in the 1920’s, Dr. Butterfield saw an alarming trend in histories being written at that time. Historians have an incredible task set forth for them, one that requires them to look at history and make subjective statements about those events. This may seem counterintuitive; but it isn’t really. It isn’t possible to look at a historical event and be completely objective. But we can radically depart from truthful history, a history that is a reliable, when we interpret it in relation to the present. When we make statements like being on the “right side” of history or that those who fought on the side of the Confederacy in the Civil War were bad people, we make moral statements about history that do not include its many complexities. One issue of constant consternation is the basis of our own country: was it founded on the Christian faith or were the forefathers of America Deists and therefore it wasn’t? It is an oversimplification to say that America was built on the framework of either system. This is in part because when you interpret the past based on our understanding of events, you impose a 21st century perspective onto the 18th century; that’s 200 years of innovation and change that you throw out.

Butterfield’s argument follows this train of thought. History is complex and we have a tendency to want to make moral judgements on those in history. Take another example in the Civil Rights Movement. While we can look back and say that the Civil Rights Movement was a good thing, we can easily run into trouble from a historical perspective when we throw the baby out with the bathwater in making overarching moral judgements on those who did not support the movement. Were they all bad people? Of course not; there were some very good people who just had wrong ideas. But this isn’t the point of history. History assembles facts from primary sources and then tells a narrative to help laypeople understand how they fit together. It is outside of the historical realm to impose what you believe is right or wrong into history.

Another example that I thought was really interesting (and one that I’ve heard before) is that the so-called “Dark Ages” were devoid of any scientific progress or intellectual thought. This is surely an absurd statement, but we point to it (wrongly) when we want to make the point that religion corrupts people into mindless drones who can’t think for themselves. But this disregards the fact that, again, history is complex; it is not as simple as we might like it to be. You also can’t make a statement such as this without looking at all the evidence. But we want to do this, because it proves our own point politically, religiously, or economically in our current world. We have imposed our own judgements and beliefs onto a society that existed hundreds of years ago. This is akin to blatant dishonesty. The progressive historian makes no attempt to get inside the minds of what a person thought and how he lived in order to understand the facts of history. Rather, he jumps to weak conclusions to prove some belief that is irrelevant to what actually happened.

This book has really opened my own eyes to things that I see everyday in social media. I am beginning to see the fallacies that are perpetuated concerning the “right side of history” or historical generalizations that do not take into account histories complex nature.

Take a very recent example in Michelle Obama. The New York Times ran a story entitled, “Yes, Slaves Did Help Build the White House.” This article sprang from a comment Mrs. Obama made that the house she lives in was built by slaves. The writer of the article says, “Mrs. Obama was reaching for a similar point on Monday, emphasizing as President Obama often does that the strengths of the United States spring in part from its ugly, painful past.” But you see the fallacy? It’s “ugly” and “painful” past? This is imposing a 21st century view of equality onto a people group several generations back. This is not to excuse their actions; indeed, we can say today that that was an evil thing. However, from a historical point of view, history (again) is simply a recollection of facts put into a story. The over-simplification of America’s “ugly” and “painful” past does a disservice to millions of people.