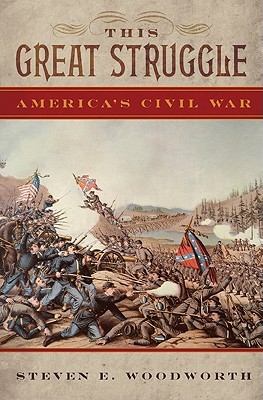 I have never been particularly interested in Civil War history. To my chagrin, I had to take a Civil War and Reconstruction class for my degree this past semester. And I actually am really glad that I did. To my great amazement, the Civil War is an intriguing part of American history, and much misunderstood as well.

What Dr. Woodworth (consequently, also my professor for the course) attempts to do in this volume is speak about the causes of the Civil War, a history of the war itself, and reconstruction in 400-some pages. This is an incredible feat and this one volume condensed version of a history of the Civil War is a miracle unto itself. Most works that try to do what Dr. Woodworth has done in this one book would span 900+ pages. What is also enjoyable is this is a fairly easy read as well. Some of the older versions of a history of the Civil War are marked with language that is incomprehensible to the modern reader. The pictures scattered throughout also do much to give an exposition of the study.

There is much too much information to discuss about the Civil War, but this treatment is vast in scope. Beginning with the slavery issue in the early 19th century, Dr. Woodworth succinctly describes the problems the country was facing toward the midpoint of the century. Putting the slavery issue again and again off the table with the Missouri Compromise and the Kansas-Nebraska Act only fueled the outrage of the abolitionists and the pro-slavery Southerners. Presidents, legislators, Congress, and a morass of other influential leaders did nothing to solve the problem either. When Abraham Lincoln was elected to the Presidency in 1860, the straw that broke the camel’s back had been laid. Starting with South Carolina, the southern states began to secede from the Union.

What is interesting in those early years of the war is the incompetence of what would become known as the Army of the Potomac in the Eastern theater. The wily General Lee would go head to head against several Union Generals including the disastrous General McClellan (who would later go on to run against Lincoln in 1864 for President). By refusing to chase Lee and enact a defeating blow against the Confederate army, the Union generals probably prolonged the war past what it could have been. McClellan and others believed if the Union army could take the Confederate capital of Richmond, the war would be over. They were never able to coordinate an attack that even got close.

On the opposite side, the Western theater saw many more successes. Early victories by Ulysses Grant put the Confederates on their toes and never let off. The Union won resounding victory after victory. Eventually, Grant would take the fortress of Vicksburg after a long siege. He would leave to command the ailing Army of the Potomac while his protegee, William Sherman, would go on to lead the army in the west.

Grant was able to go head to head with Lee and eventually the two armies met at Petersburg, Virginia. They were stymied and set in for a quasi-siege. In the meantime, Sherman took his army and marched all the way to Atlanta. Conquering this city from the capable but aggressive Confederate General Hood, Sherman led his famous “March to the Sea” to Savannah, Georgia, enacting his “total war” theory which had his soldiers scavenge for food, set fire to certain buildings, and demoralize the southern Confederates. Similiar tales were told of his Carolina Campaigns.

It all came to a head when Grant and Lee finally broke the siege. Grant’s army was able to take Richmond while Lee made off toward Lynchburg. Eventually, the two sides agreed to meet. Lee was trapped and peace was signed at Appomattox, signalling the end of the war.

Such a brief overview does no justice to the book or to the Civil War, but it gives you an idea of what I’ve gleaned from the last eight weeks of reading this text. The strategy and logistics of the Civil War are fascinating and I recommend a thorough study be given to them. The political and social storylines are equally intriguing. Some argue that there still persist today.