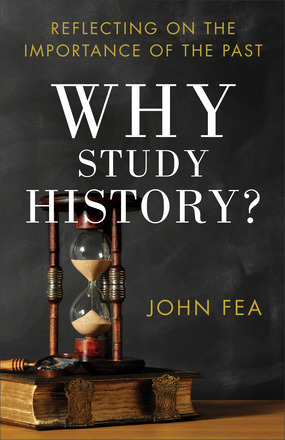 Sometimes I’ll read a book and just keep thinking about it over and over again. It will come up in conversations, I’ll share what I’ve been learning through it to others, and it will drastically impact my view that particular subject. John Fea’s book has made me go through this experience again, to my delight. This is an incredible book not only on history, but particularly on being a Christian historian.

Chapter 1 deals with the question, what does a historian do? History in its most basic sense is the collection of facts about the past. Put together, they weave a story that non-historians can easily digest. So historians are the people who are responsible for assembling data and putting together a coherent narrative.

This leads to problems though. How can one be purely objective in his/her assemblage of such data? The inclusions and subsequent exclusion of source material, the historian ultimately is led to interpreting the past. And with interpretation comes bias. And with bias comes bad history. In chapter 3, John Fea looks at the task set before a historian: to tell the truth about the past. But this truth telling is often times clouded amongst a barrage of differing interpretations. Understanding your biases and telling the story of history in the most objective way is of utmost importance.

Dr. Fea looks at several different interpretations that have a negative impact on reaching this lofty goal. First, providentialist history. A providentialist history examines the world as if God is responsible for everything. While from a theological perspective, this is true. However, the historian’s job is to understand events as they were. Ascribing why Alexander Hamilton missed his first shot at Aaron Burr due to the hand of God makes for bad history. Further, saying that the founders of our nation were “inspired” by God to write the Constitution is bad history as well. Second, progressive of Whig interpretation of history. I’ve written about this elsewhere, speaking from Herbert Butterfield’s “The Whig Interpretation of History.”

Among the most interesting sections of the book is why Americans like history. Many will recall their days of sitting in school listening to a teacher ramble on about dates and times. For this reason, many have a bad taste of what history is. But on the contrary, important historical sites around the United States and even the world are visited by millions of Americans a year; documentaries and a whole channel on television are dedicated to preserving history in video form; movies and other media saturate the minds of Americans with historical underpinnings. Why is this? In chapter 2, Dr. Fea gives several good reasons: the past inspires us to escape the pressures of modern life; the past inspires us and fills us with good emotions; the past helps us escape to a more simple way of life; the past reminds us of who we are; and the past is familiar and helps us engage with historical figures and connections that relate to us. I know I have been impacted by all of these traits for my own love for the past.

Some of the later chapters are about how to use the art of history in the world today. For example, in chapter 6, titled “History for a Civil Society”, Dr. Fea looks at how history can be used to effect the world and change it. Chapter 7 is entitled “The Power to Transform” and is about how as Christian historians, we can engage the culture at large. Chapter 8 is about what you can do with a history degree.

Overall, this is an impactful book that both the budding Christian historian and the layman would find interesting. I am discovering there are many parallels with historical study and a multitude of different occupations. I sometimes kick myself to adding a history major because it is taking me a really long time to graduate. But with the encouragement of this book, I am more convinced that my time has not been wasted and I have learned much about myself and about the world around us that will serve me better in future years because of this long stroll through history.